Australia’s two largest property markets, Sydney and Melbourne have recorded the largest falls in property prices since the financial crisis.

Sceptics of a large fall in Australian housing prices have long decreed that “Australia is different”, that our nation through some combination of culture, lending standards and other factors, is somehow immune to the large housing price falls endured by other nations throughout the world.

For that reason, perhaps now is the time to examine a few ways that Australia is different to these nations that suffered housing crashes during the financial crisis.

Australia’s level of household debt to GDP is one the highest in the world, with the current level being more than 58% larger than that of the United States at that nation’s absolute peak. 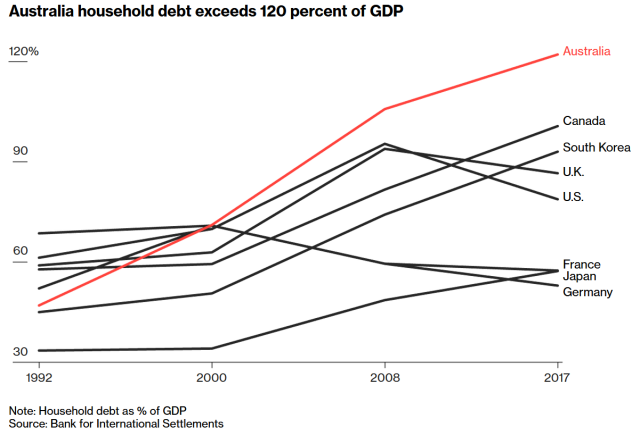 Generally banks throughout the world prefer diversified loan portfolio’s spread across a number of different loan classes. However, in Australia our banks have concentrated heavily on residential property, with our banks holding more than doublethe proportion of residential mortgage loans as banks in the United States.

As you can determine from the graphs above, the sceptics are a hundred per cent correct that “Australia is different” although not for the reasons they espouse.

With the combination of one of the highest levels of household debt in the world, a banking system built on a previously unheard proportion of mortgage lending and some of the highest property prices on the planet Australia could scarcely be more different to other comparison nations.

One way or another, the Australian property market is going to become a pertinent lesson for policy makers and economists of the future. Either it will be recorded as the largest property bubble to ever safely deflate or it will become a reminder that asset price bubbles always find a way to eventually burst.