As the political and philosophical battle lines are increasingly drawn in the sand, some of those left in the middle are slowly gravitating towards the ideology they feel most aligns with their personal morality and beliefs the most.

In the popular imagination many may believe these people should be gravitating to the left, after all it is a group of people that espouse tolerance and inclusion for all who may come.

But the reality is parts of the modern left, increasingly under the influence of elements that were considered an “extreme fringe” just a few short years ago is driving everyday people away from liberalism.

This is perhaps best illustrated by the Walk Away campaign where lifelong liberals and Democrats are breaking with the political ideology that they held dear for so long. 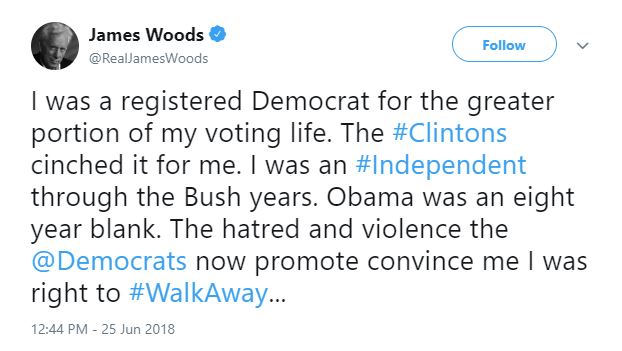 It’s not that these people’s values have changed, from what I’ve seen they still believe in freedom, equality and tolerance just like they always did. What has changed is how militant elements of the left have become in the enforcement of its idea’s on people within its ranks and on the general public.

If your values don’t align exactly with those of the hard line “progressives” on this particular day then you’re behind the times, a bigoted dinosaur that doesn’t seem to understand “things are different now”.

The militant left is going after the Walk Away movement with a vengeance, those who “Walked Away” are treated like apostates and traitors to an ideology that they’re practically not allowed to leave.

The “Walk Away” movement has been written off by some Democrats as a Russian backed online movement concocted to affect the party’s chances in November and going into the future.

The fringe left simply cannot accept that it is their own betrayal of long held values like freedom of speech and its increasingly divisive rhetoric that is driving away liberals, so they must attribute people leaving their movement to an outside forces interference

Even extremely liberal individuals are attacked for being insufficiently “progressive” in the eyes of the militant left. Ian Mckellen for example was attacked by supporters of the #MeToo movement for sharing his thoughts on sexual exploitation in Hollywood. Mckellen has championed LBGT rights and other progressive movements for decades, but in this one instance he was not in lockstep with his fellow liberals.

For this apparent transgression he was ceaselessly attacked until someone realized it was perhaps not the best idea to be seen berating a 79 year old gay man who has advocated for the LBGT cause for over 30 years.

Because of this militancy those who have “Walked Away” are now looking for a new broader church, some like the Walk Away movement founder Brandon Straka have turned toward conservatism as a new ideological home after no longer feeling welcome at their old one.

Those who have Walked Away bring with them new viewpoints and ideals to their new ideological homes, taking with them the best parts of genuine progressive thinking and a willingness to engage in a genuine good natured political debate.

It would seem that some of the now ideologically homeless progressives are realizing a basic truth that is hidden under decades of mistrust and media narratives that have at times stoked the conflict, we are not really all that different after all.

Underneath decades of mistrust and ideological armor many Americans of all political persuasions still possess a common thread. A belief in the fulfilling the dream of America, of making the founding fathers vision of equality, life, liberty and the pursuit of happiness  a reality.